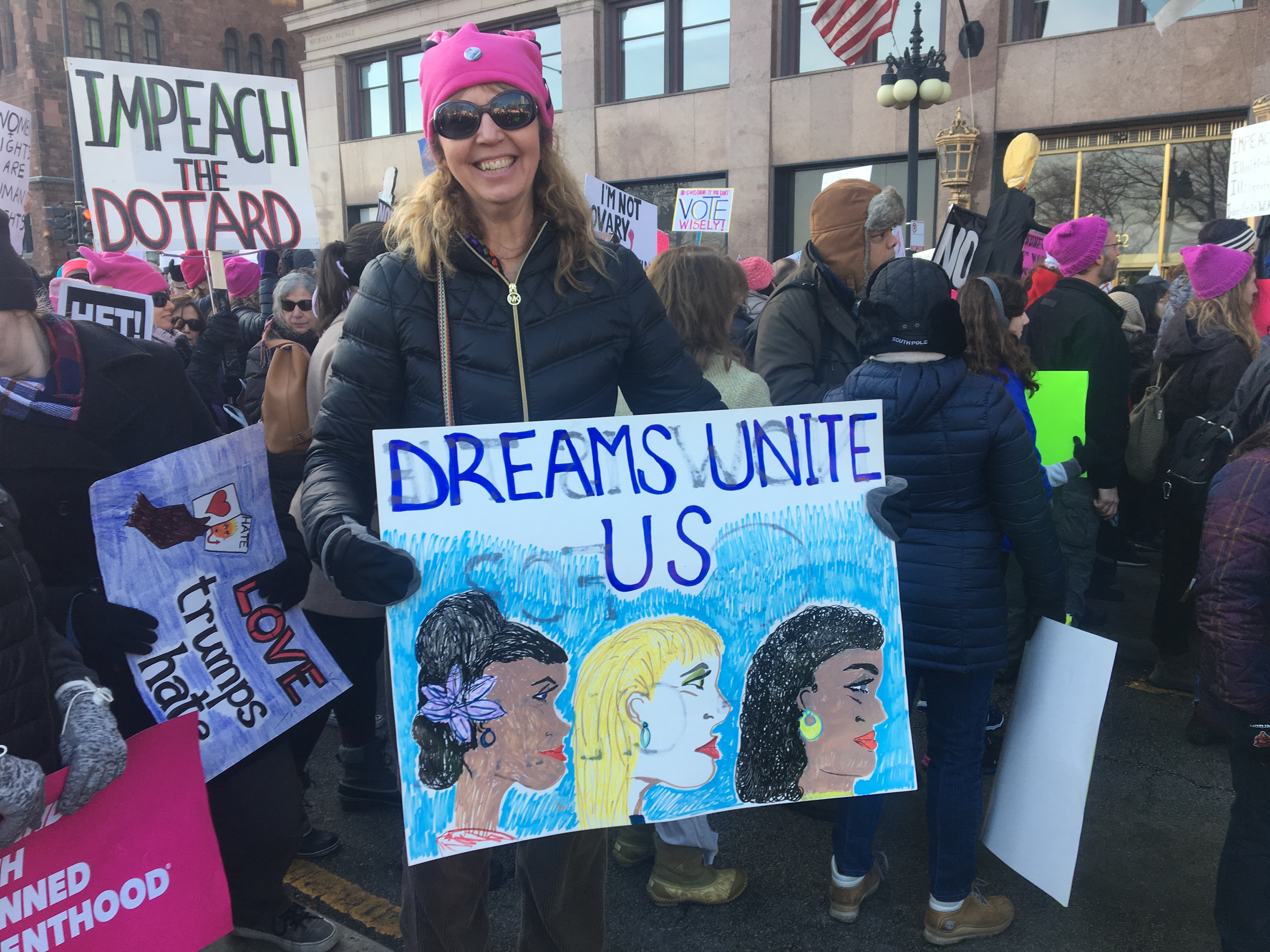 Sue Ranft of Des Plaines at the Jan. 20 “March to the Polls” rally with her sign, made during the NWSOFA poster meetup event earlier this month.

At least two busloads of Northwest suburban residents joined the estimated 300,000 participants at Grant Park in Chicago on Saturday for the “March to the Polls” women’s march.

Sue Friedman, Des Plaines resident and co-lead of the Northwest Suburban Organizing For Action “Stand With Women” group, said there were that many marchers from her group alone, though the two buses became separated by the massive turnout filling the park and nearby streets.

“I’m okay with baby steps, but only in the march,” Friedman said, laughing, as she made her way through the crowds. “We need big leaps of progress for women.”

Her local arm of the national OFA group met earlier this month to make posters for the march. Among those who marched from the Journal coverage area were Friedman and her husband; Sue Ranft of Des Plaines; Laura Walker of Palatine; and NWSOFA “Stand With Women” co-lead Florence Palumbo Zilka of Wheeling.

“There are so many age groups, men and women, it’s amazing,” said Friedman while marching down Michigan Avenue. “Last year’s event was more into empowering women. This year is much more confident and powerful.”

Women and allies across the country marched last year on President Donald Trump’s inauguration day, in part to protest of his electoral college defeat of Democratic candidate and popular vote winner Hillary Clinton.

Since the inauguration, sexual harassment scandals in Hollywood and national media outlets have kept women’s rights issues in the public eye, with the #MeToo and Times Up solidarity movements becoming popular on social media.

This year, many protesters’ signs still criticized the president, including Walker’s, which read “Impeach the Dotard.” Others included a large Trump puppet labeled “Sexual Predator in Chief.”

“Back in the ‘80s, politicians were much more moderate. Even then, when I saw a candidate was pro-life, I was out,” Walker said. “Just last week, Donald Trump talked to the pro-lifers.”

The president was far from the only issue protesters took on this year.

“There are so many things to support,” said Friedman as she admired signs surrounding the NWSOFA group as they marched forward. Chants from the Northwest suburban group included calls for equal pay, the importance of voting and the right to choose.

“The energy is great,” said Ranft, a Northwest suburban high school teacher. Her poster read “Dreams Unite Us” in reference to the Deferred Action for Childhood Arrivals immigration policy rescinded by the Trump administration. Minors who enrolled in the DACA program are referred to as “Dreamers.”

Though marchers made it to Federal Plaza by Saturday afternoon, NWSOFA’s effort to empower women and champion equal rights doesn’t end there. Members of the group plan to meet for a post-march after party from 6:30 to 8:30 p.m. Feb. 6 at the Greater Palatine Area Democrats Headquarters, 1310 W. Northwest Hwy., Palatine.

Friedman also said she has scheduled a meeting with State Rep. Marty Moylan (D-55th) this Friday to discuss support of women’s issues in Springfield, including the Equal Rights Amendment.

“This is our year,” she said. “We have to support women.”